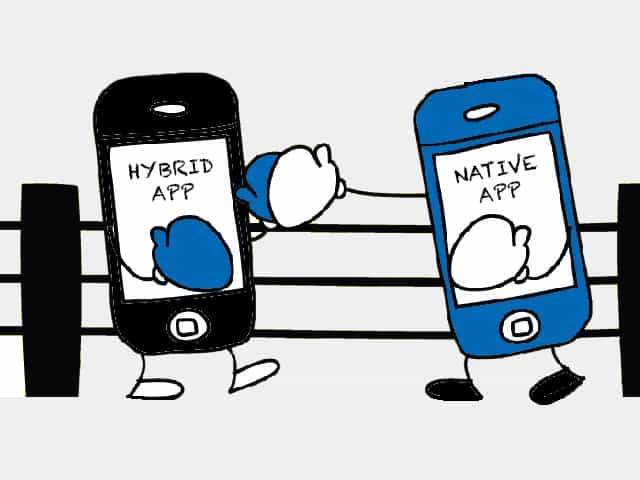 If you’re planning to develop a mobile app, you may get confused whether you should build a hybrid app or a native mobile application. Mobile apps can be developed in different ways and entrepreneurs should make the right decision while choosing which type of app should be developed.

Quick one liners to help you understand both the terms:

Developers can utilize web code by using SDK. Faster and cheaper solution for building mobile apps. “Write once, use anywhere” kind of solution.

One needs to choose whether the app should be developed for iOS or Android. Ensure better performance of apps.

Just like native mobile apps, hybrid apps are installed on a device, but they’re built on HTML5 approaches. They run on “Write Once, Run Everywhere” strategy. Such apps offer a consistent, cross-platform user interface that is compatible with most of the mobile devices. One such example of hyrbid apps is Netflix app.

Being cross platform apps, they can be distributed between different app stores without developing separate versions of the app. Most of the hybrid apps are built using cross platform web technologies such as HTML5, CSS, and JavaScript. After that, they’re wrapped in native app like Cordova. The two major players in the world of hybrid apps are Phonegap/Cordova and Appcelerator Titanium.

As hybrid apps are built on single base, other functionality can be added for multiple versions of the app. Developing hybrid apps is a faster and simpler process when one needs to build mobile app for different platforms.

Save Time and Money

Hybrid apps are known for lower cost of development. There’s no need of developing different codes to be released on Google Play Store and App Store. As the developers do not have to build separate versions of apps for Android and iOS, the cost of hybrid app development is relatively lower as compared to that of native apps.

Such apps are written in different programming languages with different codes for iOS or Android platforms. Android apps are built in Java while iOS applications are developed in Objective-C. When entrepreneurs decide to develop native mobile apps, they require experience in working with different platforms. The end result is an app with an enhanced user experience (UX) with more overhead and app maintenance costs. If your app requires to render a great user experience, building native app can be the right solution for you.

When you select native app development, the app would be specifically designed for iOS or Android and so, the user interface (UI) will match the standards that are pre-defined. Such apps allow users to use mobile apps in a personalized and interactive manner. So, if your business needs to have increased engagement, native apps can be a good option.

One of the major advantages of native apps is that they are specifically built for a particular operating system and so, they deliver an amazing interface that is seamless and intuitive. Native apps can tap into the device’s functionalities such as camera, microphone, and GPS.

So, what’s the best?

Well, it depends on your business goals and objectives. Consider your major requirements and target audience before you choose between native or hybrid app development.

The Bottom Line: If you have a luxury budget, you can think of building an app with native features so that it offers a great user experience to your users. On the other hand, if you want to spread your wings across several platforms without investing a huge amount of money, an hybrid app can serve the purpose.